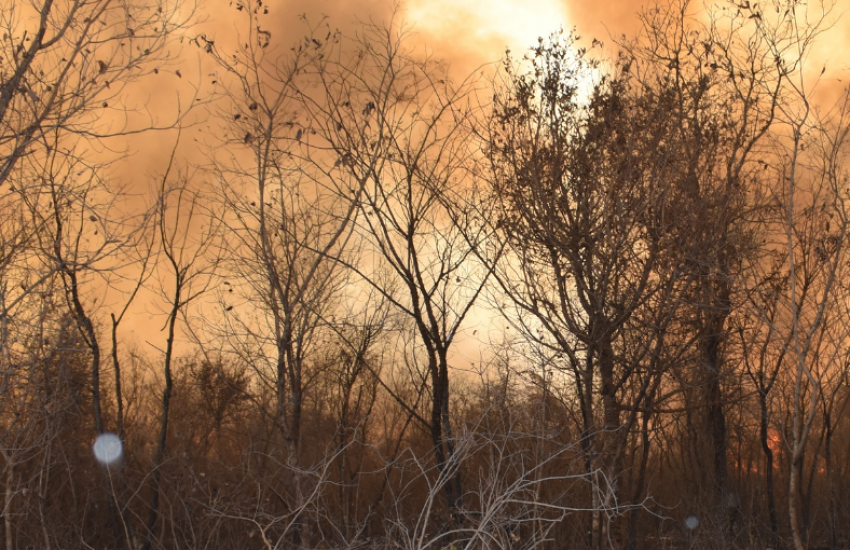 The story behind the flames

South America is in an environmental crisis as a result of harmful public policies and private sector practices. This has resulted in an unusually large increase of forest fires in biodiverse ecosystems. Most media attention has been directed towards Brazil and the Amazon, but the Chaco, Chiquitania and Pantanal landscapes in Bolivia and Paraguay are also on fire. IUCN NL supports local conservation efforts in these areas. Local civil society organizations (CSOs) now call on the national governments of Brazil, Bolivia and Paraguay to review their current policies that incentivize deforestation and unsustainable productive practices.

Although natural fires are usual during the dry season the scale of the fires and their distribution is very unusual. Mariel Cabero, expert environmental justice at IUCN NL explains: “These forest fires have been fueled by trade deals and policies which favor land clearing for soy, cattle and ‘biofuel’”. Land clearing using fire, coupled with the dry season, high temperatures and winds have resulted in devastating fires in the region.

How have the fires affected the landscapes where we work?

In Bolivia alone, fires have affected around a million hectares. Cabero: ‘In the recently declared Indigenous protected area Nembi Guasu in Bolivia, more than 150.000 hectares of the 1 million have been burned.’ The most affected was the Chiquitano dry forest, which was the largest healthy tropical dry forest in the world, where approximately 800.000 hectares have burned so far.

In Paraguay more than 37.000 hectares were burned in a few days, including almost 6000 hectares of a nature reserve called Tres Gigantes (14.000 hectares), which is managed by our partner Guyra Paraguay.

‘The affected ecosystems represent an inseparable part of the invaluable natural and cultural heritage of humanity due to their contribution to the mitigation of climate change and the provision of services to sustain local livelihoods.’ Cabero explains. ‘These landscapes are home to iconic wildlife (e.g. jaguars, giant armadillos and tapirs), as well as to indigenous peoples and uncontacted communities.’

Unfortunately, the fires are still active and the number of hectares burned by the fires continues to increase. It is crucial that the fires are controlled as soon as possible: ‘We are doing what we can to support our partners with logistics and equipment’, says Cabero. ‘Currently, they are playing a crucial role in the landscapes by gathering data, keeping civil society informed about the spread of the fires and the underlying causes.’

This situation calls for immediate action. Cabero explains: ‘In the middle of this crisis we believe it’s important to think, together with our local partners, about what needs to be done so this magnitude of fires does not occur again and to restore the affected landscapes and livelihoods.’

There have been several public statements from local environmental, legal, and human rights CSOs. They are calling for international help, condemning the policies which enable land clearing and demanding that the affected areas be restored and not used for agricultural production. Based on the concerns of our local partners we have the following recommendations for interventions at local, national and international levels:

Measures should be taken to restore environmental damage. Key issues are assistance to the population of the region, veterinary assistance and rescue of wild animals, evaluation and remediation of current damage to water sources, prevention of ash pollution in the affected landscapes, and reinforcement of management measures and restoration of protected areas affected. Additionally, there should be measures to strengthen the (inclusive) environmental governance and to ensure indigenous communities’ land rights.

‘After the fire we need to make an ecological analysis, since there are areas which might be able to regenerate by themselves but also there are areas which need ecosystem restoration. Additionally many small scale farmers have lost their crops’, says Sara Crespo of partner organization Probioma.

he governments of Brazil, Bolivia and Paraguay should review their policies that incentivize deforestation and unsustainable productive practices. In Bolivia, for example, civil society is questioning a recently approved decree which, among other things, authorizes the use of fire for land clearing during dry season. ‘The decree is part of an agricultural agenda between the government and the private sector (agribusiness and cattle) and aims to expand the agricultural frontier mainly for soy, cattle and sugar cane’, says Pablo Villegas of partner organization CEDIB.

It is imperative to also look at the international markets and question their role in forest conservation: ‘Most developed countries are the consumers of the commodities produced from our forests, this is what is destroying our forests’ says Villegas.

Read more about the fires in the Amazon