Poaching and illegal trade constitute a major threat to animals such as the rhino, elephant, pangolin and jaguar. To prevent these species from becoming extinct IUCN NL works to combat wildlife crime.

Poaching endangered species has severe consequences. Not only for the animal in question and its offspring, but for entire ecosystems and local population that rely on these ecosystems. Trade in wild animals is often linked to other illegal trade flows, such as drugs, wood and gold, which commonly involve money laundering. Moreover, this crime represents major risks in terms of security. The proceeds from illegal trade in wild animals (illegal wildlife trade) is used to fund rebel groups in diverse countries[1]source: UNODC World Wildlife Crime Report 2016 In addition, every year, increasing numbers of park rangers and other nature conservationists are murdered, as revealed in the study by Global Witness.

In our quest to put an end to poaching we work closely with the local population. After all, they are our eyes and ears in the areas where endangered species live. We train them in preventing and combating wildlife crime and in recognising and reporting (early signs of) poaching in their area. We also help develop alternative sources of income, so that poaching becomes less attractive.

Increasing the chance of getting caught

To tackle crime we must invest in reinforcing the investigative system. Together with our partners, we train park rangers and the local population to collect and document evidence that can be used to convict poachers. We also support the judicial authorities, such as the Public Prosecution Service, in formulating the indictment and building a strong case, so that the chance of a conviction is as high as possible. 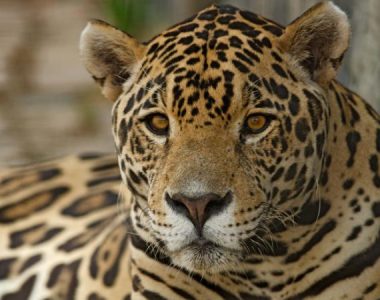 Our Operation Jaguar project aims to put an end to the illegal trade and poaching of jaguars in South America.

Reducing the demand for wild animals

Poaching and the illegal trade in wild animals can only be fought by demonstrating how disastrous the impact is and by reducing demand. Therefore, we draw attention to the problem of wildlife crime among the public and politicians. We investigate the scope, structure and dynamics of the criminal networks and pass this information on to the relevant parties. We create awareness and increase the pressure to take action.

Wildlife crime is a cross-border problem

Wildlife crime is increasingly becoming a form of organised crime. For example, existing illegal trade routes for the drugs or arms trade are used in the process. This means that an animal from South America can be transported to Asia, via Europe. A cross-border problem that must also be tackled at the international level. One of the ways we do this is by contributing with our local partners to legislation in different countries.

What can we do in the Netherlands to combat wildlife crime?

The Netherlands can play an important role in the fight against wildlife crime. Such as by drafting and implementing a national action plan to prevent illegal trade in animals and by contributing to the European Wildlife Crime Action Plan.

The latest updates on how we combat wildlife crime