The global trade in soy is accompanied by devastating damage to nature, particularly in South America. IUCN NL brings together major players in the Netherlands with the aim of making soy value chains and production areas more sustainable. IUCN NL advocates for European legislation to safeguard nature and human rights in value chains, as well as for active support for farmers and social organisations in countries where soy is produced.

The beans of the soy plant are a rich source of protein, suitable for human and animal consumption. The largest volume by far is used as cattle feed. The oil from the beans is also used as plant-based oil and as biodiesel. In order to satisfy the growing demand for soy, grasslands and wetlands are being converted into soy plantations (conversion), particularly in South America. The effect: large-scale loss of biodiversity. IUCN NL applies its expertise to make the soy value chain and production areas greener – from production to trade and consumption.

The Netherlands is a major importer of soy-based cattle feed. It consumes a certain amount, but the largest share is exported. IUCN NL is the initiator of the Dutch Soy Platform. This multi-stakeholder platform composed of the government, companies and social organisations is committed to the transition to 100% responsible, conversion-free soy in the Dutch value chain, also beyond what is found on our supermarket shelves.

The Dutch Soy Platform unites representatives from the Dutch government, the retail sector, traders, the animal feed sector, the oils and fats industry, the dairy sector, sustainability initiatives and NGOs to exchange knowledge and determine a joint strategy. The platform’s aim is for all soy consumed, traded and processed in the Netherlands to be produced responsibly, which means not at the expense of forests or other natural resources. IUCN NL and other members of the platform are also committed to conversion-free soy on the entire European market and in areas where soy is produced.

In 2019, IUCN NL published three studies that form important building blocks for our efforts related to responsible soy. The first study compiled an inventory of the amount of forest in Brazil, Argentina and Paraguay that can be legally cleared to make way for soy or livestock production: it was revealed to be an acreage almost three times the size of the Netherlands (110 million hectares). Conclusion: the broad application of high-quality sustainability standards is needed, in addition to the legal requirements on site, in order to conserve biodiversity in these countries. This is another thing we advocate for.

Sustainability standards serve as a benchmark

Two things are important when establishing the quality of sustainability standards: 1) how strict the rules are on biodiversity, the environment and human rights and 2) how effectively they are monitored for compliance.

Therefore, IUCN NL had a benchmark study performed into the most common sustainability standards in the soy chain for cattle feed. The conclusion: the cattle feed sector must adopt a more ambitious standard in its guidelines in order to combat the loss of biodiversity. Improvements are also required in transparency and compliance monitoring.

IUCN NL urges the government, supermarkets, cattle feed companies and financial institutes to raise the bar with regard to decisions on purchasing, loans, investing, policy and laws and regulations. The application of strict sustainability standards must no longer be voluntary.

Insight into European trade in soy

In 2019, we initiated the European Soy Monitor in association with IDH. This recurring study is used to analyse the extent to which European trade in soy complies with the standard applicable to European cattle feed companies (FEFAC) and the stricter deforestation-free sustainability standards of, for example, the RTRS, Pro Terra and Donau Soja. 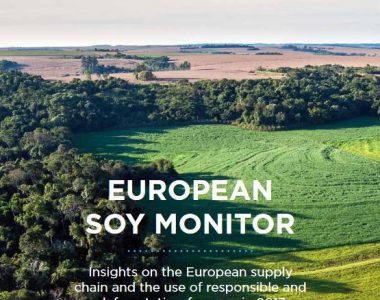 The 2020 monitor reveals that in 2018, just 19% of European trade in soy was guaranteed conversion-free and that no more than 38% complied with FEFAC guidelines.

Would you like more information about our publications related to responsible soy?

Standards and rules work best if there is a level playing field for businesses, which means if the agreed sustainability requirements apply to the sector as a whole or to multiple sectors. This is why IUCN NL also applies its knowledge at the EU level, including in relation to the Deforestation Law, which the EU is to present in 2021, with the aim of putting an end to deforestation worldwide. We provided five minimum sustainability criteria for commercial agricultural crops traded on the European market, such as soy and palm oil. In addition, IUCN NL advocates for aid for countries that grow these products to improve their forest management and sustainable farming practices. Not only aid for governments, but also for social organisations and farmers that engage in responsible production.

For IUCN NL the ultimate goal is for all raw materials worldwide to be produced in a socially responsible manner with the conservation of biodiversity. Not only soy, but also palm oil and other plant-based oils and minerals. The choice of the consumer as the final link in the value chain also plays a role, concerning, for example, protein consumption. IUCN NL’s vision is that consumers will have to move away from animal to more plant-based protein in order to conserve biodiversity on earth. IUCN NL advocates for this protein transition, in association with the Food Transition Coalition (Transitiecoalitie Voedsel) by urging the Dutch government and companies to encourage plant-based consumption.

Using evidence and the media to eliminate mercury in Bolivia