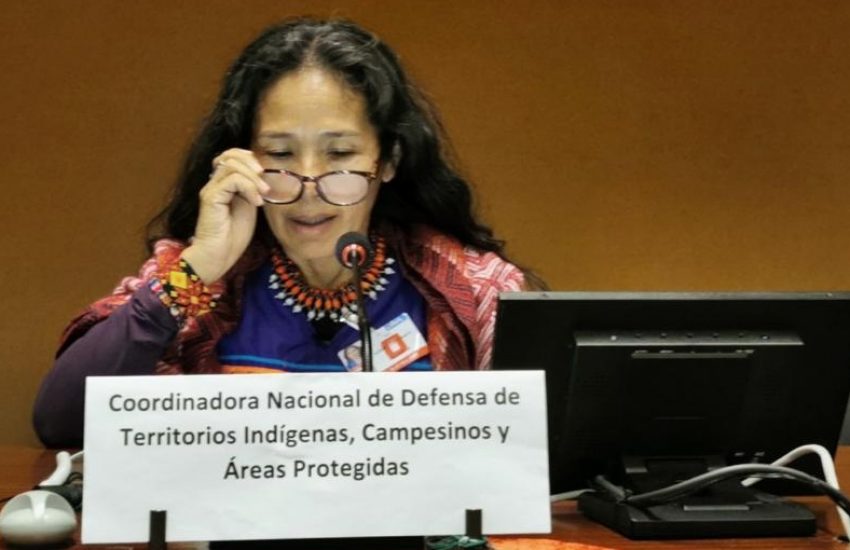 Every five years, the human rights records of all UN member countries are reviewed in the Universal Periodic Review (UPR)*. IUCN NL partner Ruth Alipaz gave a speech at Bolivia’s UPR pre-session. She presented the concerns and findings of a civil society platform which consists of 50 civil society organizations (CSOs). For two years, they documented environmental and human rights violations in Bolivia.

IUCN NL’s local partner organization CEDIB, Ruth Alipaz and two other indigenous and community leaders formed the Bolivian civil society delegation that travelled to Geneva to participate in the UPR pre-session, which was attended by a number of UN member countries. In addition to participating in this session, the delegation had a number of bilateral meetings with country representatives.

Ruth is an indigenous female leader from the Bolivian Amazon. The organization she belongs to (CONTIOCAP) is part of the CSO platform, which is led by CEDIB. “For almost two years, the platform has been working together and gathering evidence on human, environmental, and indigenous rights violations,” says Ruth. The reports put out by the platform present evidence of these violations, which are often linked to the Bolivian government’s policies and international corporations’ activities. Ruth says:  “There are policies which have been destroying nature and causing wildfires. We have found cases where the government did not comply with peoples’ free prior and informed consent, and violated their rights to a healthy environment, water and food.”

Indigenous peoples are especially affected by these human rights violations, a majority of the cases -16 out of the 23- are related to their right to life and environment. The other 7 cases are related to oil and gas extraction and to infrastructure. Ruth highlighted this in her speech to the UN countries: “Indigenous peoples are the ones who suffer most from these practices. The government does not take their rights into account.” The fact that indigenous peoples inhabit and safeguard the most biodiverse ecosystems of the planet, makes it even more crucial to protect and secure their rights.

Call for support by UN countries

Based on the platform’s findings, Ruth called the UN member countries to give Bolivia’s government recommendations during the UPR Bolivia session, which will take place early November. “The government needs to ensure that the rights of indigenous peoples and uncontacted communities are respected. Environmental and human rights defenders should be safe when protecting their land and their rights.”

It is important for civil society to share their concerns related to human rights with other UN countries:  “The UPR is an important space to voice our concerns. Among the UN countries, our government has the image of nature protector, but in the country itself the reality is very different. The outside world needs to listen to civil society,” Ruth argues.

*The Universal Periodic Review (UPR) is a process which involves a review of the human rights records of all UN member countries. This process is done every five years and allows civil society’s voice to be heard by the member countries, who can give recommendations to the country which is being evaluated.