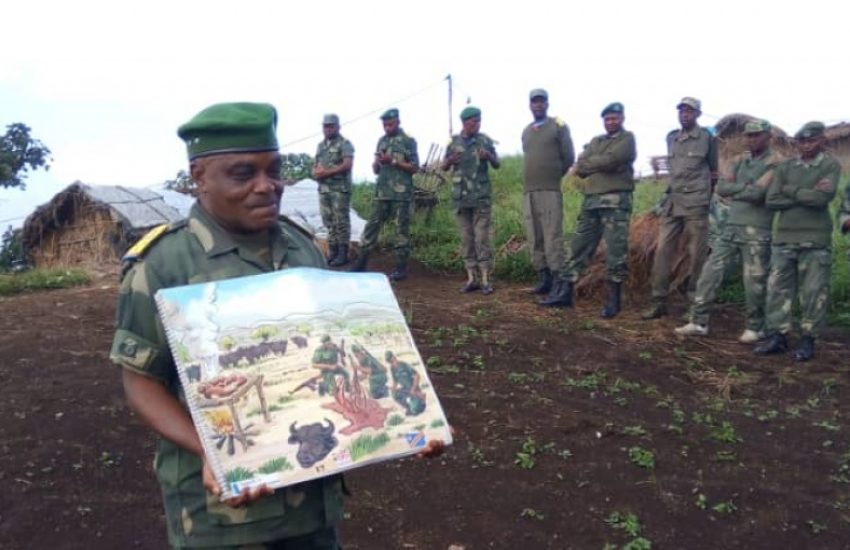 Virunga National Park is exceptionally rich in biodiversity, but is under extreme pressure due to poaching, deforestation and illegal fishing. As long as the judiciary does not recognize these environmental crimes, park authorities are left powerless. The criminals they arrest are often not prosecuted, and able to get out by posting bail. We are fighting this impunity together with legal authorities, for example by providing legal assistance to park authorities and communities, so plunderers are no longer able to continue their practices without consequences.

Virunga National Park is home to many rare, endemic and endangered species, such as mountain gorillas, elephants, hippos and chimpanzees. However, in 1994 the park entered the list of endangered world heritage because of poaching, deforestation and illegal fishing, mostly practiced by armed rebel groups.

The perpetrators are often able to plunder natural resources with impunity. Appeals against environmental criminals are often denied or suspects are able to post bail, which often does not benefit the public purse, but disappears into the pockets of corrupt officials. This lack of judicial prosecution and serious sanctions demoralizes the park rangers who risk their lives on a daily basis to protect Virunga. Would you risk your life if you know that the perpetrators will walk free within three days?

We are fighting this impunity with support of the European Union. Together with partner organization ACEDH, we push for better legal protection of Virunga and local communities.

In cooperation with legal authorities, we vouch for prosecution of criminals against biodiversity and we provide assistance to park authorities and communities around Virunga, so plunderers are no longer able to operate with impunity. Additionally, we involve high courts in the region in fighting crime in Virunga. By providing training, we ensure that judicial authorities are better able to file charges, carefully set up a case file and create a solid lawsuit.

Partner organization ACEDH provides legal support to Virunga National Park in ongoing lawsuits, to ensure that judicial inquiry will take place in due time and the defendants will appear in court. Thanks to this collaboration, 15 defendants have received a prison sentence so far.