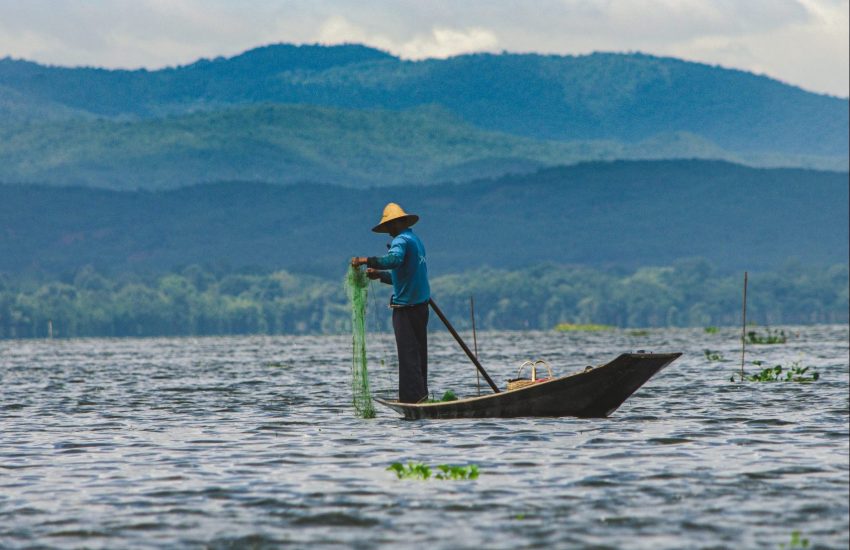 Illegal fish farming was causing water pollution and high levels of fish mortality in the Philippine Taal Lake. With the support of IUCN NL, the local nature organisation Tanggol Kalikasan worked on improving compliance with the law. The result: the fish are returning and the income of local fishermen has been secured.

Header photo: Fisherman on lake by Zinko Hein on Unsplash

Taal Lake, located on Luzon, the largest island in the Philippines, is one of the country’s deepest and largest lakes, with a depth of 172 metres and Taal Volcano situated in the middle of the lake. It is home to a large number of unique animal species such as Sardinella tawilis, the only freshwater sardine in the world, and a rare species of freshwater sea snake. The whole area has been officially protected since 1996.

Approximately 4000 people living in the vicinity of Taal Lake depend on fishing for their livelihood. Since the late ’90s, they increasingly began to suffer from an influx of illegal farmers of tilapia, a non-native fish species. To facilitate farming on a large scale, these illegal fish farmers constructed cages in which hundreds of fish are concentrated together. This caused significant problems. Such large numbers of fish having to coexist in so small a space resulted in a shortage of oxygen. In addition, the water became extremely polluted due to the increasing quantities of fish manure and antibiotics. Hog farms located close to the lake also dumped their manure into the water. These factors resulted in massive fish kills. The Pansipit River, the only tributary of Taal Lake, became so clogged with fish cages that the wild native species were no longer able to use the river as a migration route, which proved disastrous for their breeding cycle. These problems caused the Sardinella tawilis catch to decline by about 80 percent.

Since 2003, IUCN NL has been supporting the local nature organisation Tanggol Kalikasan in addressing this issue. Tanggol Kalikasan started off by bringing together local fishermen and discussing with them how the situation could be improved. They took the ideas that emerged from this dialogue to regional authorities with a plea to combat the illegal fish farming. Together they developed measures for monitoring and effectively managing the lake and the fish population. A special task force was created to implement these measures, which included removing the harmful fish cages and issuing fines to those breaking the rules as well as close monitoring to ensure ongoing compliance with the law.

Improved compliance with the rules has reaped marked benefits. The removal of the cages from the Pansipit River has allowed fish species to migrate and breed again. After only a short period of time, Sardinella tawilis was again abundant in the lake. This has also meant local income – 35% of which comes from tawilis fishing – has been secured. In addition, water quality has improved significantly, which has enabled the local population to benefit from increased tourism as well.

Tanggol Kalikasan’s successful approach has not gone unnoticed. Local governmental agencies have recognised the necessity of effective management and have adjusted their policies accordingly, making sure a sufficient budget is available annually to enforce the laws and regulations that safeguard the quality of the lake. Other Philippine provinces facing similar issues have visited Taal Lake to learn from Tanggol Kalikasan’s experiences.