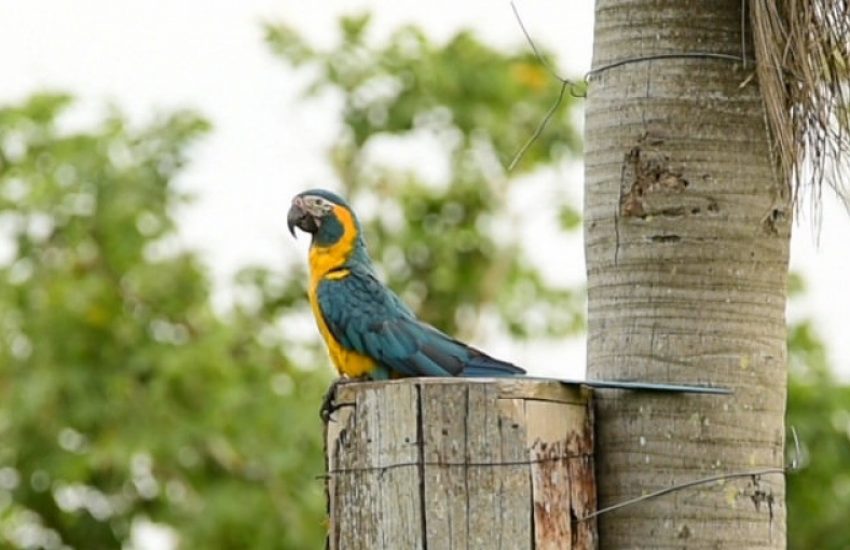 With no more than 500 individuals in the wild, the odds of survival for the blue throated macaw were looking pale. With the help of the IUCN NL’s land acquisition fund, the bird’s habitat in Northern Bolivia – including the specific palm trees it requires for food and nesting cavities – is now secured, making this reserve the most important site for its conservation in the world.

The Beni Savannah is a unique ecosystem in Northern Bolivia that is home to a wealth of threatened bird and mammal species, including the blue throated macaw, of which as few as 250-300 individuals remain, earning it a critically endangered status on the IUCN Red List.

The region is crossed by three major rivers and is comprised of five distinct habitats providing shelter for 288 bird species, and 27 mammal species. Its landscape is cluttered with a distinct mosaic of forested islands. The blue throated macaw depends on these islands for its food – the nuts of the Motacu palm – and nesting cavities.

The Beni Savannah has undergone hundreds of years of cattle ranching, disturbing grasslands with overgrazing, burning and replanting exotic species of plants. Major habitats for these

inhabiting animals are becoming minimal and reducing the chance of their survival.

To protect this unique area, Armonia, a Bolivian non-profit wildlife conservation organization, in 2008, created The Barba Azul Nature reserve: a 3,555 hectare protected area within the Beni Savannah region. However, more land was needed to stop the dwindling and disruption of habitats, and have a large enough area to support the breeding of endangered animals in the region, such as the blue throated macaw.

So in 2013, IUCN NL supported the acquisition of 1,900 new hectares to conduct better land management and importantly, safeguard areas where those specific palm species grow that provide food and nesting cavities to the macaws.

The odds of saving these species further improved with the allocation of another grant of the IUCN NL’s land acquisition program in 2017, which enables Armonia to secue an important 681 hectare breeding area for the southern population of these macaws. To further support the increase in the birds’ population, Armonia is installing artificial nest boxes within the reserve. ARTIS Amsterdam Royal Zoo also contributed to these nest boxes.

Due to additional protection, the region is now a vital and thriving habitat supporting the long-term survival of the blue throated macaw. The site has become part of an ongoing research project to provide feedback and evidence of its progress. It is now evident that the regeneration of isolated forest islands and the creation of these large nest cavities will greatly improve the chances that this critically endangered animal will thrive.

The nest box program has generated great results: to date, Armonía has assisted a total of 93 blue-throated macaw chicks to fledge from the nest boxes. This is a significant contribution to this species recovery considering the size of its current global population in the wild. Thanks to continuous improvements of the nest boxes, the number of blue-throated macaw chicks that have fledged from them has gradually increased. During the breeding season 2018-2019 a record of 12 chicks fledged from their nest boxes, making Barba Azul the most important site for conservation for this critically endangered species.

It is now evident that years of efforts to protect this species have not gone unnoticed- the blue throated macaw has been declared a national heritage species.