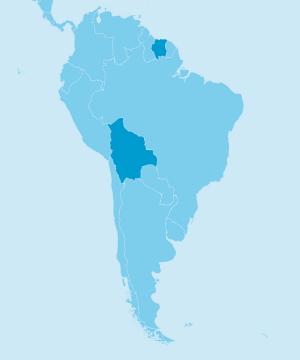 Indigenous peoples and local communities have deeply rooted knowledge about nature. Even though half of the world’s biodiversity is in indigenous territories, this knowledge is often overlooked and underestimated in mainstream conservation strategies. The project ‘Rewilding traditional knowledge in jaguar landscapes’ aims at ‘rewilding’ the indigenous and local communities’ knowledge, specifically targeting landscapes with frequent interactions of humans and jaguars.

Ecosystem degradation destroys much more than we often realize. In addition to physical damage, there is also cultural damage. While the term ‘rewilding’ is mainly used for the physical world, planting trees and reintroducing species, this will not be successful unless the link between humans and nature is restored. That is why we use the term ‘rewilding knowledge’ to invest in these ancestral ties.

“Indigenous peoples and local communities possess detailed knowledge on biodiversity and ecosystem trends. This knowledge is formed through their direct dependence on their local ecosystems, and observations and interpretations of change generated and passed down over many generations, and yet adapted and enriched over time.” 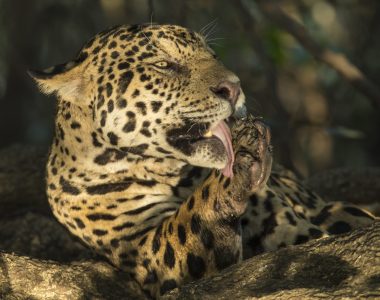 What are we doing with this project and why?

In this project we restore, document and disseminate traditional knowledge for future generations and for the conservations community. In this process, the role of elders and youth groups is central to restore and revive local people’s knowledge. The documented knowledge will be disseminated among the different generations and through our IUCN network it will be fed into science – and research platforms. The project focuses on two landscapes in the south of Bolivia and in Suriname.

The power of the jaguar

The jaguar will be the focus species in this project because it is a keystone species, not just in ecological terms, but also in cultural terms for many Indigenous peoples. In this light, the power of the jaguar, a precious ancient energy in indigenous cosmology, that transforms, heals and protects all the living beings in the forest, can be a valuable asset to complement efforts to protect the jaguar.

The most important key jaguar areas on the continent overlap with indigenous territories and traditional communities. Our project Operation Jaguar, that tackles the illegal trade in jaguar body parts in Latin America, confirmed that for successful protection of the jaguar the role of the local population is central.

In the project ‘Rewilding traditional knowledge in jaguar landscapes’ we distinguish a research and an education phase. During the research phase, with the help of experts, communities will share and document their knowledge about their appreciation of the jaguar and their coexistence with jaguars. Through participatory 3D mapping, which has proven successful in a project with the Saamaka communities in Suriname, we connect people, jaguars and their land use.

Read more about 3D mapping with Saamakans in Suriname

The resulting knowledge products will be used in the education and outreach activities of the project, including presentations of the outcomes to the wider conservation movement; meetings between leaders and youth; safe-space dialogues between leaders, artists, biologists and anthropologists to share visions on important principles for the protection of jaguars with a central role for local or indigenous communities; and media products for the general public.