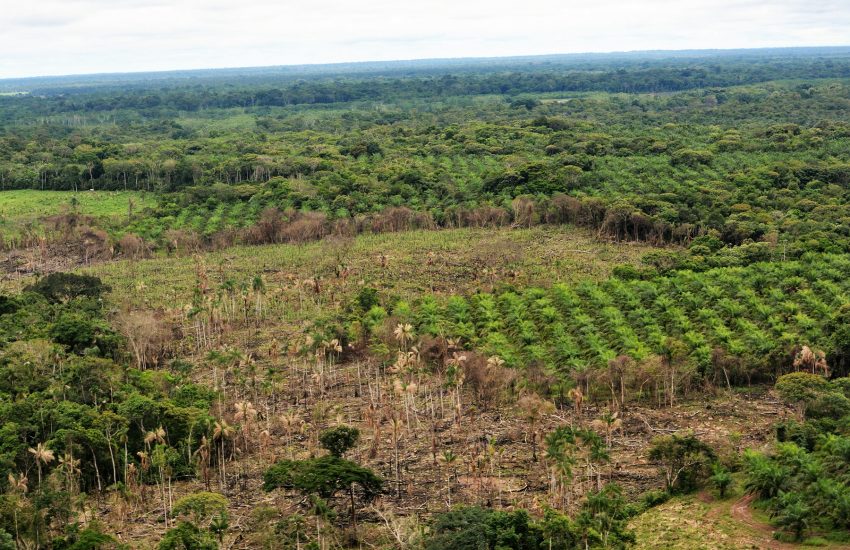 The increasing demand for commodities, such as palm oil, beef and biofuels threatens the conservation of forests, including the Colombian Amazon[1]Corporación Grupo Semillas. (2005). Frontera Agropecuaria en la Amazonia: La infraestructura de gran escala como motor de la ampliación en función de los mercados de tierras, energía y minería … Continue reading. Industrial agriculture is one of the major drivers of deforestation putting biodiversity and Indigenous Peoples and local communities at risk[2]FAO. (2020) The state of the world´s forests 2020.  Forest, biodiversity and people.. Globally, agricultural expansion, including cropland and cattle grazing, is responsible for 90% of deforestation between 2000 and 2018[3]FAO. (2020). FRA 2020 Remote Sensing Survey.. South America is affected the most: 68 million hectares of forest were lost in the same period, of which 25% due to croplands[4]FAO. (2022). Tropical rainforests under pressure as agricultural expansion drives global deforestation..

In the previous articles of our series Drivers of deforestation in the Colombian Amazon, we discussed the interrelationship between cattle ranching and land grabbing as drivers of forest loss. This article will analyse another main driver: industrial agriculture, which is becoming a growing issue in the Amazon region.

The impact of industrial agriculture

In the Colombian Amazon region, palm oil and, to a lesser degree, eucalyptus are the main industrial crops[9]Fundación para la Conservación y el Desarrollo. (2020). Reporte FCDS Deforestación Amazonia Colombiana 2020.. Palm oil is the most consumed vegetable oil in the world and its use ranges from biofuel production to soaps for domestic use. Colombia is the fourth producer of palm oil in the world and the first in the Americas; it is currently grown in 21 of the country’s 32 departments.

Companies and armed groups join forces to illegally evict and occupy peasant lands. They often intimidate people so they are forced to sell their land at very low prices[11]Perdomo, K. (2018). Vista de Palma en el Chocó: apropiación y despojo de tierras vs sostenibilidad. Diálogos de Derecho y Política.. The communities of Curvaradó and Jiguamiandó in the Colombian Pacific region, registered more than 3,000 forcedly displaced people and 20,000 people dispossessed of their land through illegal appropriation by large palm oil companies and powerful individuals[12]Montero, D. (2011). Curvaradó y Jiguamiandó: La gran prueba de la restitución de tierras de Santos.. These actions were carried out by paramilitary groups with the participation of the national army and involved the assassination of community leaders and others.

The palm oil sector is becoming increasingly profitable. The year of 2021 showed record figures: 1,706,000 tons of palm oil were produced gaining a profit of 7.5 billion Colombian Pesos (approximately 1.5 million euro’s). Because of the growth in demand, the palm oil sector is increasingly attracting the attention of investors in the Amazon[13]Valenzuela-Amaya, S. (2021). La agricultura, un motor silencioso de la deforestación Amazónica. Centro de los Objetivos de Desarrollo Sostenible para América Latina.. In Colombia, but also in other Amazon countries, including Peru. Taking into account the disastrous history of palm oil businesses in the region, alarms must be raised.

Protected areas and Amazonian Indigenous reserves are also being affected by this unstoppable force driven by the global market.

From forest to large-scale plantation

The first phase of the process is, like of all drivers of deforestation, land appropriation. After burning and felling the forest to prepare the soil, large palm plantations are created. Most of them are located in Colombia’s Amazonian departments with the highest rates of deforestation: Meta and Guaviare. In 2020, these departments lost approximately 23,800 hectares and 15,000 hectares of forest respectively[14]IDEAM. (2021). Resultados del Monitoreo de la deforestación: 1. Año 2020. 2. Primeros trimestres del año 2021..

Protected areas and Amazonian Indigenous reserves are also being affected by this unstoppable force driven by the global market. Recent research of FCDS (2022) shows the impact of industrial agriculture in the extreme north of the reserve of the Nukak-Maku, one of the Indigenous communities hit hardest by the land grabbing boom[15]FCDS. (2022). Seguimiento de la pérdida de bosque y cambio de cobertura en el arco de deforestación en la Amazonía Colombiana (abril 2021 – marzo 2022).. Like the neighbouring Chiribiquete National Park, this reserve was declared natural and cultural heritage of humanity. Still, hectares of forest have been eliminated for palm cultivation.

As mentioned, armed groups also invest in agro-industrial businesses. In legal statements, former paramilitary chiefs admitted dispossessing thousands of hectares of land from peasant communities in the departments of Meta and Guaviare for the development of industrial agriculture. This concerned large-scale plantation with up to 3,000 hectares of palm trees[16]VerdadAbierta.com. (2009). ‘Don Mario’ y las caletas de Vicente Castaño..

The Colombian authorities have zero-deforestation agreements with palm oil producing federations. Despite the fact that the federations have promised not to buy palm oil from farms in protected areas, it is estimated that 4,455 hectares of forest were replaced by these crops. These economic associations assure that it is a very low figure compared to other factors of deforestation. The problem, however, steadily continues to gain ground in the Amazon forests.

According to The National Federation of Oil Palm Growers of Colombia (Fedepalma), 70% of Colombian palm oil is exported to Europe. The Netherlands is the largest European buyer: export to the small country grew from 2% in 2012 to 11% in 2017. The Dutch sector signed in 2018 an agreement to responsibly manage the supply chain.

Understanding the dynamics of deforestation allows us to move towards the common objective of our Amazon rights in focus project. We work together with La Fundación para la Conservación y el Desarrollo Sostenible, Ambiente y Sociedad and Mongabay, to protect the rights of the Colombian Amazon forests, as well as the livelihoods of the Indigenous and local communities depend on these important ecosystems.

In this series, we dive into the main drivers of deforestation in Colombia: land grabbing, cattle ranching, mining, illegal logging, industrial agriculture and illicit crop cultivation. In a series of articles we will analyse the causes, consequences and actors involved in each of the drivers.

About Amazon rights in focus

News from the Colombian Amazon