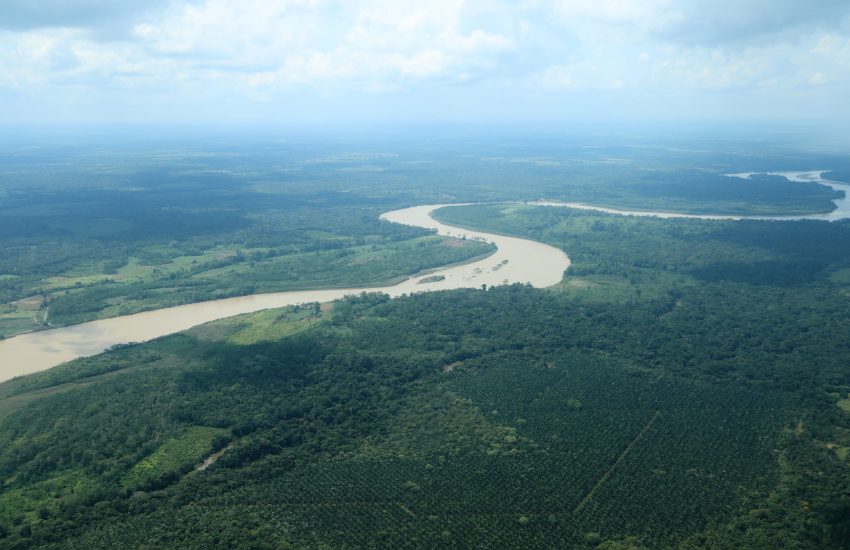 Colombia is one of the most biodiverse countries in the world, but its forests are disappearing at a rapid pace. It is estimated that the South American country lost a forest area comparable to the size of its capital city Bogota in 2021. The Amazon region is most affected, covering 65% of the deforested areas. Deforestation causes irreparable damage to one of the most biodiverse ecosystems in the world, while its conservation is key to mitigating climate change and safeguarding biodiversity.

Understanding the dynamics of deforestation allows us to move towards the common objective of our Amazon rights in focus project. We work together with La Fundación para la Conservación y el Desarrollo Sostenible, Ambiente y Sociedad and Mongabay, to protect the rights of the Colombian Amazon forests, as well as the livelihoods of the Indigenous and local communities that depend on them.

IUCN NL research intern María Molina studied the main drivers of deforestation in Colombia: land grabbing, cattle ranching, mining, illegal logging, industrial agriculture and illicit crop cultivation. In a series of articles, she will analyse the causes, consequences and actors involved in each of the drivers.

In this first article, we will discuss the underlying cause of all deforestation: land grabbing. In the complicated Colombian sociopolitical context, land appropriation implies deforestation. Areas devoid of forest are more “useful” to people and companies claiming land. In the current post-conflict context, forests that were previously inaccessible are now being destroyed at a rapid pace.

Land seen as a highly profitable commodity is the basis of land grabbing. In a broad sense, land grabbing refers to the appropriation of extensive amounts of land by entities, governments or individuals with the aim of ‘controlling the benefits of its use’ (Transnational Institute, 2013). Such uses range from the extraction of natural resources, such as water, minerals, wood, development of industrial crops and even speculation: the purchase of land with the expectation of selling it at higher prices. Owning land implies a wide range of options to build wealth.

Their wealthy land contrasts with the poverty in rural communities. Colombia is the most inequitable country in terms of distribution of land on the continent after Brazil.

Land grabbing affects territories and communities that inhabit them. Areas previously dominated by small-scale agriculture are transformed into large projects that demand more and more resources as large-scale businesses require large investments, and considerable space for their development. This has a major impact on landscapes. Increasing privatisation of land threatens local economies [9] and displaces rural communities from their territory. People who stay in their area of origin are usually forced to be part of the labour force in the illegal chain of appropriation.

‘Land is power in Colombia,’ stated Daniel Henryk in 2020. Colombia is one of the richest countries in the world in terms of natural, mining and energy resources: 52% of its area is covered by forests. The country’s water resources are among the most abundant in the region and it has large reserves of oil, gas and metals. On its fertile soils almost any type of crop flourishes. In other words: Colombia offers endless possibilities for highly profitable land use.

Their wealthy land contrasts with the poverty in rural communities. Colombia is the most inequitable country in terms of distribution of land on the continent after Brazil. Meanwhile, companies and wealthy people claim an increasing amount of territory: ‘1% of the largest landholdings now occupy 81% of productive land’ (Oxfam, 2017). This land is, for example, used for sugar cane, palm oil and other plantations, gold mining, oil extraction and – most frequent – cattle ranching.

In the context of the Colombian armed conflict, violence and crime have played an important role in land grabbing. The origin of the conflict was precisely the dispute over land. These realities intermingle, for example, for the cultivation of illicit crops, money laundering and general territorial control for illegal operations. FARC dissidents, paramilitaries and criminal gangs, including state actors, such as politicians and military forces, are part of criminal networks.

After the Colombian peace agreement was signed in 2016, the interest in Amazonian land exploded.

A growing interest in land

During more than 50 years of internal conflict, the Amazonian departments were controlled by the guerrillas, making them dangerous and inaccessible to investors. After the Colombian peace agreement was signed in 2016, the interest in Amazonian land exploded. The consequences were devastating. In 2017, deforestation figures were the most alarming in recent history. More than 219,000 hectares of forest were razed that year, over twice as much compared to the average per year between 2001 and 2015.

The Amazon region is part of the Forest Reserve Areas, declared by the national government for the development of the forestry economy and protection of soil, water and wildlife. Within these areas, there are large “baldíos” (wasteland) owned by the state, which can be awarded to landless peasants demonstrating to productively use the land. However, large landowners, some of them part of political elites, have taken advantage of this route to further grow their properties. They are often helped by corrupt judges.

According to Insight Crime and Igarapé Institute (2021), three stages are identified in land-grabbing processes: clearing, occupation, and commercialisation. The process of “clearing” consists of the elimination of the forest through fires or felling. Once the land is cleared it is ready to be occupied, often by keeping large amounts of livestock or growing agricultural crops. These types of activities proof “productive use”, meaning the rights to the land can be claimed.

Once they own the property title, landowners can access government subsidies for the development of productive activities. The larger the property, the higher the subsidy, which only further increases inequality. An example of this is the Agro Ingreso Seguro programme, one of the biggest corruption scandals in Colombia’s recent history. Commercialisation is the last stage in the land-grabbing process. After the property title is claimed, the land is usually sold to other investors.

Land grabbing in Colombia is a complex problem involving actors at different levels that are part of national and international power systems. The local impact, however, is often very tangible: deforestation causes a severe loss of biodiversity and people who have been living in the forest for generations have to deal, for example, with polluted soil and weather.

News from the Colombian Amazon

Drivers of deforestation in the Colombian Amazon: illicit crops