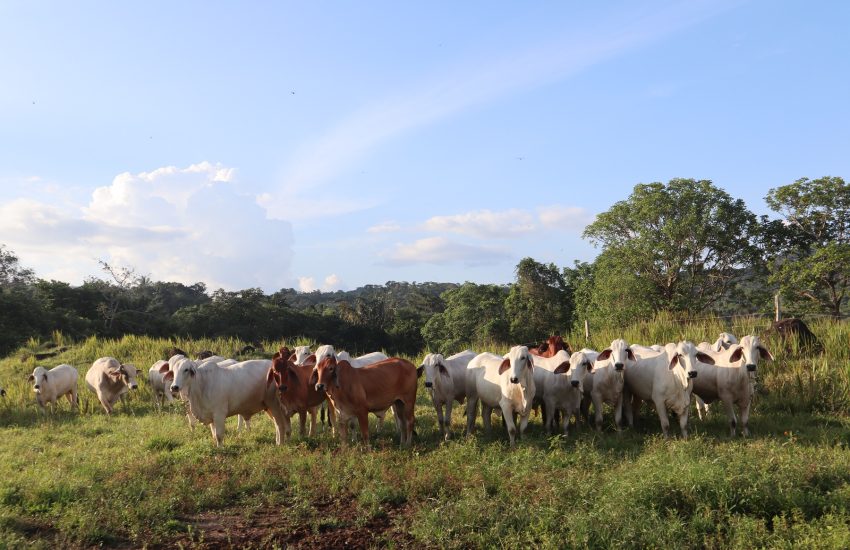 A land of cows

The transformation of primary forests into pasture for cattle ranching represents 50% of the national deforestation rate registered between 2005 and 2015 [2]González, J. Cubillos, A., Chadid, M., Cubillos, A., Arias, M., Zúñiga, E., Joubert. (2018) Caracterización de las principales causas y agentes de la deforestación a nivel nacional período 2005 … Continue reading. Currently, they occupy 36.6% of the country’s total area, more than double of the land suitable for this use[3]Instituto Geográfico Agustín Codazzi – IGAC. (2021). Colombia, un país con una diversidad de suelos ignorada y desperdiciada.. ‘Cows in Colombia have more land than peasants,’ says Carlos Suescún, Professor at the Faculty of Economic Sciences of the National University of Colombia. In 2015, figures of the Censo Nacional Agropecuario showed that on some large-scale farms one cow has a grazing area up to 3.5 hectares, while a small-scale, local farmer on average owns 1.4 hectares.

In 2017, one of the years with the highest deforestation in the country, more than 183,000 hectares were lost in the Amazon region alone, mainly due to illegal appropriation of land for cattle ranching[4]Rodríguez-de-Francisco, J. C., Del Cairo, C. Ortiz – Gallego, et al. J. 2021. Post-conflict transition and REDD+ in Colombia: Challenges to reducing deforestation in the Amazon. Forest … Continue reading

Land grabbing and cattle ranching are intertwined drivers of deforestation; together they form the greatest cause of environmental degradation[5]Center for Alternatives to Development. (2021). Defending the forest. Dynamics of forest transformation and community-based alternatives in the northwestern Amazon region.. As discussed in the previous article, deforested areas of the Colombian Amazon are occupied with cattle to provide proof that the land is used in order to be able to claim property titles from the authorities[6]Clerici, N., Armenteras, D., Kareiva, P, et al. (2020). Deforestation in Colombian protected areas increased during post-conflict periods. Sci Rep 10, 4971..  According to Bram Ebus, researcher at the Crisis Group, introducing livestock is also a way to show other appropriators that the land has already been taken.

Although cattle ranching is prohibited within the national parks, livestock in La Macarena National Park grew more than sevenfold between 2016 and 2019.

There is evidence of a direct relationship between the increase in the number of heads of cattle and the increase in hectares of deforested forest. In the northern municipalities of the Amazon region alone, it is estimated that 2 million head of cattle were registered in 2019, almost double the figure of 2016. In turn, deforestation reached a total of 300,415 hectares[7]Centro de los objetivos de desarrollo sostenible para América Latina. (2021). La huella de la ganadería en la selva amazónica..

Cows as guardians of land ownership

Although cattle ranching is prohibited within the national parks, livestock in La Macarena National Park grew more than sevenfold between 2016 and 2019[8]Environmental Investigation Agency. (2021). Tainted Beef. How criminal cattle supply chains are destroying the Colombian Amazon.. In the northern area, adjacent to the Chiribiquete National Natural Park, the number of cows tripled and 17,000 hectares of forest were destroyed. According to Rodrigo Botero of FCDS, the Yaguara II and Nukak-Maku Indigenous reserves face the occupation of their territories because of this development.

‘The real function of cattle is not to sell meat or leather, it is to be guardians of land ownership,’ says Colombian sociologist and lawyer Alejandro Reyes. Although keeping livestock is a means rather than an end, the profit made is still an additional benefit.

At the beginning of this chain, big investors based in the cities often run the operations. It is common for them to pay small amounts of money to vulnerable communities for the felling and burning of the forest and to the take care of livestock.

Despite the trail of illegality, corruption, deforestation and violence, cattle meat from the Amazon region ends up in large supermarket chains.

While raising the animals, both small and large producers are forced to pay fees for each head of cattle to armed groups. After the Peace Agreement in 2016, FARC dissidents, Autodefensas Gaitanistas, ELN and other non-state armed groups have strengthened their positions in the Amazon region. Among other things, they (violently) control businesses in the region and obtain profits from extortion.

Cattle raised in protected areas is officially illegal and therefore cannot be registered in the agricultural records of the authorities, or even be vaccinated. These animals cannot be slaughtered or sold. At this point, a new actor jumps in: a rancher in the region who is in possession of the required permits is paid do make the cattle part of their herd. This step in the process is known as cattle laundering.

Despite the trail of illegality, corruption, deforestation and violence, cattle meat from the Amazon region ends up in large supermarket chains. Consumers buy these products without realising that they are indirectly financing the deforestation of one of the most biodiverse areas in the world[11]Environmental Investigation Agency (2021). Tainted Beef. How criminal cattle supply chains are destroying the Colombian Amazon..

Understanding the dynamics of deforestation allows us to move towards the common objective of our Amazon rights in focus project. We work together with La Fundación para la Conservación y el Desarrollo Sostenible, Ambiente y Sociedad and Mongabay, to protect the rights of the Colombian Amazon forests, as well as the livelihoods of the Indigenous and local communities depend on these important ecosystems.

In this series, we dive into the main drivers of deforestation in Colombia: land grabbing, cattle ranching, mining, illegal logging, industrial agriculture and illicit crop cultivation. In a series of articles we will analyse the causes, consequences and actors involved in each of the drivers.

More about Amazon rights in focus

More updates from the Colombian Amazon