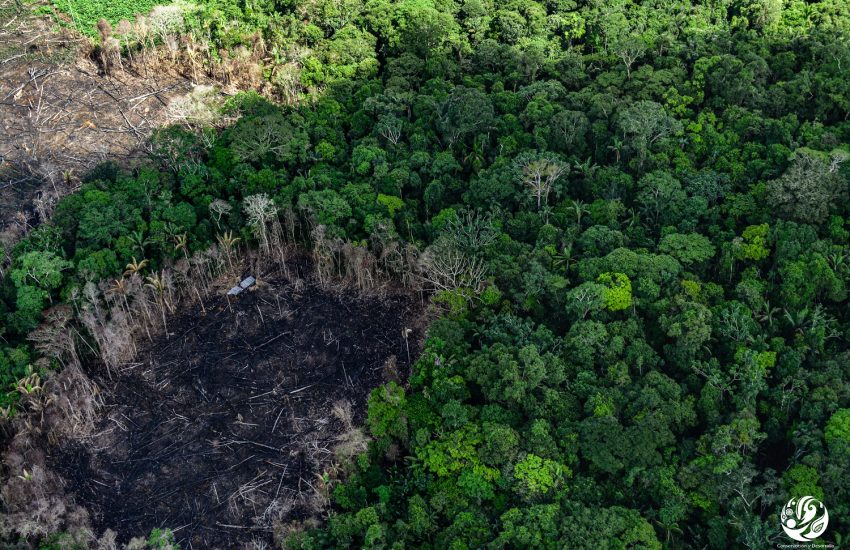 Drivers of deforestation in the Colombian Amazon: illicit crops

Throughout a series of articles on deforestation, we have seen how the accelerated loss of forests in the Colombian Amazon region is the result of the interrelationship between the global market demand, corruption in government institutions, the socio-economic situation in Colombia’s rural areas and the armed conflict. In this article, we analyse the role of illicit crops, and coca in particular, in deforestation. Crops for illicit used are historically linked to violence in Colombia and affects not only Indigenous and local communities, but also severely damages the environment.

For the Amazonian and Andean Indigenous communities, the use of the coca leaf is fundamental to their way of life. Coca is considered a sacred plant of great nutritional, spiritual and healing value[1]UNODC-SIMCI. (2022). Monitoreo de territorios afectados por cultivos ilícitos Colombia., and some of their ancestral practices include the use and cultivation of the plant[2]Mamacoca. (2002). La coca no es cocaina.. However, in the mid-1980s, the use of the coca leaf was appropriated and disrupted by drug traffickers and armed groups in Colombia. It was a response to the growing global demand for cocaine[3]Gaia Amazonas. 2019. Plantas sagradas, elemento clave para el manejo de los Territorios Indígenas., the narcotic extracted from coca leaves after a chemical treatment. Armed groups involved in drugs trafficking violently took control of rural territories, turning cocaine into the main driver of the armed conflict in Colombia.

According to a recent report by the United Nations Office on Drugs and Crime (UNODC), it is estimated that the area in Colombia under cultivation of illicit crops reached 204,000 hectares in 2021[4]González, J. C.  et al. 2018. Caracterización de las principales causas y agentes de la deforestación a nivel nacional período 2005 – 2015.. A record figure breaking the subtle decrease between 2018 and 2020. UNODC also indicates that more than 50% of the country’s illicit crops are grown in protected areas and the territories of Indigenous and Afro-descendant communities.

The Institute of Hydrology, Meteorology and Environmental Studies (IDEAM) has identified two different types of relationship between the expansion of illicit crops and deforestation: direct and indirect. In the first situation, forest areas are replaced by new coca plantations, while in the second plantations are expended by destroying adjacent natural areas.

Impact on nature and people

The illicit crops sector does not only deforest  to establish plantations, but also for the construction of processing laboratories and the development of illegal roads and clandestine tracks important for both for the mobilisation of drugs and for the invasion of new areas[6]Dávalos, L. M., Sanchez, K. M. & Armenteras, D. (2016). Deforestation and Coca Cultivation Rooted in Twentieth-Century Development Projects. Bioscience 66, 974–982..

Processing of producing cocaine impacts the environment severely. The discharge of chemical substances pollute rivers and affect the physico-chemical conditions of the soil. It is estimated that 3.5 tons of chemical residues are discharged into water sources and soils every year for each hectare of coca processed7. In addition to the fatal consequences the aerial spraying of illicit crops has on biodiversity, the crops of local communities and, above all, on the health of the inhabitants of the area[7]WWF. (2021). ¿Qué tan riesgoso para la salud y la naturaleza es volver a la aspersión aérea con glifosato?.

In a region with few economic alternatives for small-scale producers and little infrastructure for production and marketing, coca cultivation and cattle ranching are perceived by many as the only source of income.

The Amazon region represents a perfect enclave for this hidden sector, as crops are located in jungle areas that are difficult to access, making detection and intervention difficult. The Amazonian departments, in addition to presenting the highest deforestation figures at the national level, also contribute 19.5% of the areas planted with coca crops. Putumayo and Caquetá present the highest figures: 31,874 hectares of coca were registered in 2021, an increase of 45% compared to the previous year[8]UNODC- SIMCI. (2022).Monitoreo de territorios afectados por cultivos ilícitos Colombia.. The ecosystems of national parks and Indigenous territories are also affected by the invasion of illicit crops. Sierra de La Macarena National Park and the Nukak National Natural present the highest planting densities of coca plantations[9]Bernal, J., Sudarsky, J. & Gómez, C. R. (2021). Illicit Crop Cultivation in Colombia’s National Natural Parks: Dynamics, Drivers, and Policy Responses. Journal of Illicit Economies and … Continue reading.

The difficult socio-economic situation of Indigenous and peasant communities in Colombia and the weak presence of the state contribute to the illicit crop sector being able to operate without real interference. In a region with few economic alternatives for small-scale producers and little infrastructure for production and marketing, coca cultivation and cattle ranching are perceived by many as the only source of income.[10]González – Posso, Darío. F. La coca, la deforestación y la seguridad alimentaria en la Amazonía colombiana.. The cultivation of crops for illicit use therefore represents the most profitable agricultural activity in the country’s vulnerable regions[11]CEALDES. (2021). Defending the forest. Dynamics of forest transformation and community-based alternatives in the northwestern Amazon region.. As analysed in our article on land grabbing, peasant communities face many challenges when formally accessing land. They are often threatened by armed groups and the alternatives proposed in the peace agreement are not followed.

The war on drugs and deforestation

The Colombian government has carried out strategies to stop deforestation and the expansion of illicit crops. In 2019, Operation Artemisa was launched, a military strategy involving more than 23,000 members of the armed forces to stop deforestation and drug trafficking. The results are far from successful. Deforestation grew, going from 158,894 hectares deforested in Colombia in 2019, to 174,103 in 2021[12]Tarazona, D. and Parra, J. (2022). Artemisa: radiografía de una operación gubernamental que no frenó la deforestación en Colombia. Mongabay.. The operation has reignited the conflict in the region and Indigenous and peasant communities have denounced the violation of their rights. It has been strongly criticised by human rights organisation[13]Agenda Ambiental Campesina, étnica y popular.  (2021.) Comunicado a la opinión pública.  Denuncias Operación Artemisa. Meta, Guaviare y Caquetá..

Another initiative to put a halt to the Colombian illicit crops sector is the National Plan for the Substitution of Illicit Use Crops (PNIS), conceived within the framework of the Peace Agreement negotiations[14]UNODC.  (2020). INFORME No. 23 Monitoreo a la implementación del Plan de Atención Inmediata-componente familiar.. The plan seeks to promote the voluntary substitution of illicit crop cultivation by alternative livelihoods[15]Sanabria, P. (2021). El peso de la coca en la deforestación amazónica. CODS.. But the conditions of the agreement changed over time. This means that farmers who replaced their coca with another crop under the original rules will no longer be guaranteed land rights. This only further exacerbates land conflicts.

As cocaine continues to be one of the most consumed drugs worldwide, these problems in the Colombian Amazon continue. It is estimated that about 20 million people around the globe use cocaine, mainly in Europe and North America[16]Mowbray, S. 2022. El impacto medioambiental de la cocaína en el mundo. Mongabay. Many of them are likely not aware of the trail of blood, violence, poverty and environmental degradation that it causes in Colombia and other countries.

Understanding the dynamics of deforestation allows us to move towards the common objective of our project Amazon rights in focus: peoples and forest protection. We work together with La Fundación para la Conservación y el Desarrollo Sostenible, Ambiente y Sociedad and Mongabay, to protect the rights of the Colombian Amazon forests, as well as the livelihoods of the Indigenous and local communities depend on these important ecosystems.

In this series, we analyse the causes, consequences and actors involved in each of the main drivers of deforestation in Colombia. Drivers previously discussed in this series:

More updates from the Colombian Amazon