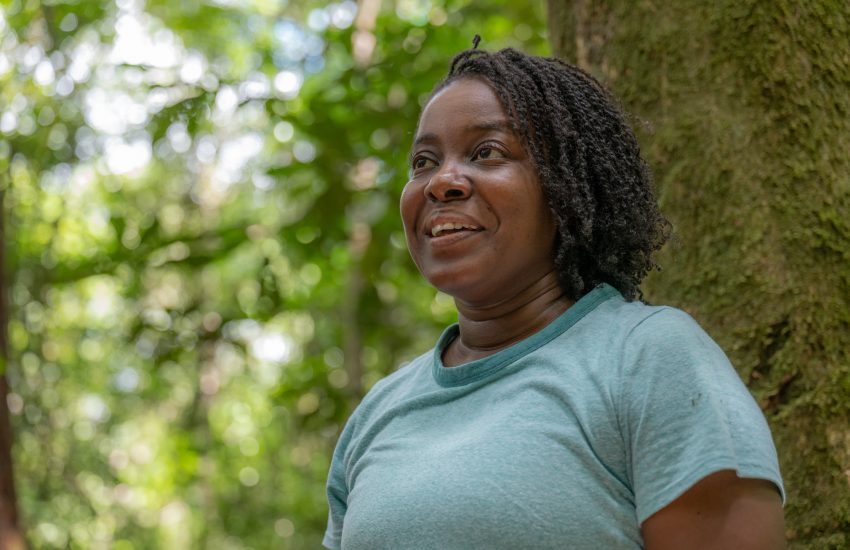 Vanessa Kadosoe is a Surinamese biologist working on various aspects of the impact of human activities on biodiversity and the environment. Vanessa works as secretary and researcher at Neowild where she conducts research, particularly on threats to big cats.

Vanessa received her MSc degree in environmental and conservation biology from the Anton de Kom University of Suriname. She still teaches there today and regularly assists with international field courses and graduate student research. In 2021, NeoWild signed an agreement with IUCN NL to study the jaguar population at Kabalebo Nature Resort as part of the Operation Jaguar project.

Early in her career Vanessa was involved in research on aquatic macro invertebrates, amphibians and reptiles and mammals, and thanks to her hard work, a water beetle was named after her in 2018. She is also concerned with the impacts of gold mining, hunting and ecotourism on mammal and amphibian communities and the effects of climate change on biodiversity and the environment.

From childhood, Vanessa told stories to her uncle about how the natives lived with the jaguar. And although she sneaked out into the woods with friends as a teenager, it wasn’t until one special moment involving her mother that she really wanted to become a biologist. ‘My mother had a garden full of plants and flowers. She was a stern and strong woman, someone you don’t easily see crying. Until one day while working in the garden she accidentally killed a lizard. She explained to me that everything in nature matters and we were not even allowed to pick the leaves off the plants. She showed me the purest form of nature love. The importance and value I place in nature comes from my mother, but university has only strengthened this calling,’ Vanessa says.

As a student in 2010, Vanessa began interviewing several people to learn more about human-jaguar conflicts. Although jaguars and pumas are fully protected in Suriname by the Hunting Act (1954), conflicts between farmers and villagers regularly lead to deadly interactions for the big cats. The animals are also actively hunted, particularly the jaguar. The meat and other parts such as the canines and skin are sold and used for things like jewelry or traditional medicines. Often they are illegally smuggled to East Asia. This problem has only been worsening in recent years with the country’s rising poverty and drive for money.

‘While being interviewed, one fisherman told me that when he sees a jaguar, he shoots right away before they can attack him. In fact, the law states that you can act in self-defense. Only this is not self-defense at all, if they really want to attack you you don’t see jaguars coming at all. They don’t just randomly attack and if they feel threatened they give a warning first. Now people are poaching under the guise of self-defense because they know they can get paid. The fact that they get paid has only increased the active hunting of the jaguar. ‘Poachers lure the jaguars with sounds of prey animals such as rabbits, agoutis, peccaries or even young dogs and then shoot them,’ Vanessa explains.

‘Due to insufficient monitoring of compliance with laws protecting the jaguar, the jaguar is highly endangered due to poaching. Wildlife Department employees, such as gamekeepers, are inadequately equipped to do their jobs properly. Exacerbated by corruption, some poachers exactly know the loopholes in the law and which avenues and agencies to avoid in order to hunt the jaguar,’ Vanessa says.

Conservation has taught Vanessa how to deal with disappointment and it has made her more understanding, for example towards local communities. ‘While I was working, a child had been killed by a big cat. In Suriname we say ‘tigri,’ but by that we mean both jaguar and puma. Although afterwards it turned out to be a puma, the community wanted to kill all the big cats in their area, not just the animal that had tasted blood. Then, as a conservationist, you have to be able to understand that they are acting out of fear and grief, and that is sometimes difficult. Many people also believe that animals cannot become extinct. After all, their ancestors also hunted and there are still animals around. But of course it doesn’t work that way, especially since nowadays certain animals, such as the jaguar, are hunted much more than before. When the predators disappear from the ecosystem, the very people in the interior who also hunt them, among others, will be the first to notice when prey animals destroy their crops excessively. You have to explain something like that very well and calmly.’

Although Vanessa experiences some setbacks while protecting the jaguar, there is also hope. By creating more awareness, the group that realizes that healthy ecosystems are in everyone’s interest is growing. Therefore, it is important that NeoWild, in collaboration with IUCN NL, collects data on the population status of jaguars and pumas from non-protected areas with different habitat types and threat levels. Although both species occur on most of the land surface, both can be rare in areas with high human impact.

By monitoring jaguar populations with trapcams, Vanessa is collecting data on the jaguar populations. This is important to find out how the jaguars are spreading and to check that the gene pool remains healthy. It is also important to understand niche segregation and habitat preferences of jaguars and pumas. But the data from the cameras also bring other insights. For example, jaguars were always thought to live solitary lives, while it now appears that they do interact in groups. ‘It is a fascinating animal that sometimes displays behavior that is very recognizable to us humans. Through the cameras we see that they really have family structures and are good mothers. As children we were always told that if we were naughty we would be thrown in front of the jaguars. That kind of statement frightens many people, but in a way jaguars are also very endearing. With this image, we can make others see the value of the jaguar. That makes people more inclined to protect jaguars,’ Vanessa states.

‘There is a lot of danger in the forest but the data and the effort you put into giving a voice to a species makes it totally worth it.’

It is Vanessa’s dream to dedicate her entire life to jaguars with everything she has. In this way, she hopes to mobilize more and more people to stand up for the jaguar. “I want no one to be able to say, ‘I didn’t knew.’ If we can get all the organizations to work together and put differences of opinion aside then together we can stand up for the jaguar’s survival,” Vanessa says.