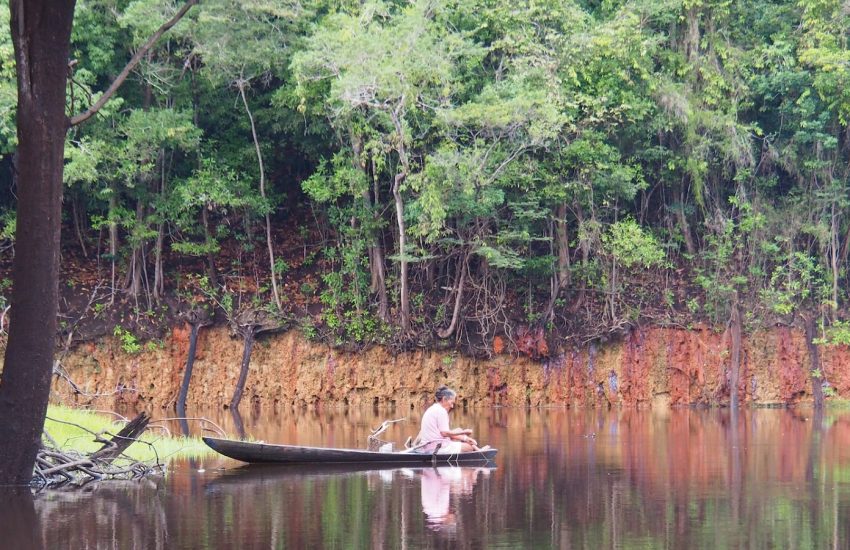 Our Colombian partner Foundation for Conservation and Sustainable Development (FCDS) organised a seminar on the protection of Indigenous Peoples in the Amazon. Last month, Indigenous leaders, representatives of civil society organisations and government authorities gathered in Bogotá to discuss opportunities to restore and protect the rights of Indigenous peoples in the Amazon rainforest. Liliana Jauregui, Senior Expert Environmental Justice at IUCN NL, spoke at the event: ‘The Escazú Agreement is a fundamental pillar for inclusive environmental governance. However, if we want to ensure that we really leave no one behind, we must not forget the gender lens.’

Header photo: woman in the Amazon of Brazil © Stephanie Morcinek on Unsplash

From 31 August until 2 September, participants from multiple Amazon countries met in the Colombian capital Bogotá. During the three day-event, they identified existing shortcomings at a national and regional level to protect the rights of Indigenous Peoples and looked into opportunities to improve the protection of their rights.

In all Amazon countries, the growing global demand for minerals and commodities such as beef, palm oil, gold and illegal crops is driving deforestation in the Amazon. Indigenous Peoples and other local communities affected by deforestation or pollution face many obstacles in exercising their rights. In the event of a social-environmental conflict, for example when their land becomes polluted due to oil extraction, they rarely win.

Unfortunately, it is not uncommon for environmental human rights defenders protecting their land and rights to be threatened or even killed. Colombia is no exception: it has been amongst two countries with the highest number of murdered environmental human rights defenders for the past years. More than half of the deadly attacks took place in Brazil, Colombia and Mexico.

Counting on Indigenous Peoples to protect the planet

The panel discussion on the first day of the seminar focused on current socio-environmental conflicts in the Amazon and how they affect Indigenous Peoples. Participants from Ecuador, Peru, Colombia and Brazil shared how large companies, often with the support of national governments, threaten their ways of life and discussed the lack of opportunity to participate in decision-making processes.

‘The land forms a strong spiritual, emotional and social union with Indigenous Peoples. Count on them to protect and prolong the life on the planet,’ said José Miller of Colombia’s Special Jurisdiction for Peace during his presentation. Miller emphasised the importance of well-functioning regulations that guarantee the protection of Indigenous Peoples: ‘We must continue to improve these protection measures, and it is important to do this in coordination with the victims [of socio-environmental conflicts] and Indigenous communities to make them effective and efficient.’

Julio Estrada of OPIAC, the National Organisation for Indigenous People of the Colombian Amazon, pointed out the important task of the new Colombian government: ‘Our conflicts derive from the Colombian government, because their policies are imposed on the Indigenous Peoples. They do not recognise that we have our own systems. But this may change with the new government.’ As national justice, education and social systems are imposed on their communities, Indigenous traditional knowledge is diminishing – knowledge essential for living in harmony with nature. For equal rights and inclusive governance, it is essential that Indigenous knowledge is recognised by the Amazon states and that their systems are integrated in national policies.

‘Gender violence is a means of control to fulfill the privileges of those who want to access natural resources. Women are invisible. If we do not count on their participation, how are we going to achieve our environmental objectives?’

Escazú Agreement from a gender perspective

On the second day, the Escazú Agreement was a key topic of discussion. This regional treaty implements Principle 10 of the Rio Declaration and is the first binding agreement in the world on environmental and human rights. It includes articles such as ‘Access to environmental information’ (article 5) and ‘Access to justice in environmental matters’ (article 8). Many Indigenous Peoples currently lack access to both. And in the wake of the COVID-19 pandemic, violence against Indigenous peoples has only increased.

The agreement is signed by 24 out of the 33 Latin American and Caribbean countries. If properly implemented, it can cause major steps forward in protecting the rights of Indigenous Peoples in the Amazon and beyond.

Liliana Jauregui, Senior Expert Environmental Justice at IUCN NL,highlighted the importance of including a gender perspective in the implementation of the Escazú Agreement. Women environmental human rights defenders, and in particular those from Indigenous communities, face even more obstacles and threats when protecting their land and natural resources. In addition, recent data, for example from Guatemala, indicates that women from rural and Indigenous communities have less and less access to spaces of decision making.

The inclusion of gender is essential not only for gender equality, but also for the protection of nature.  ‘Gender violence is a means of control to fulfil the privileges of those who want to access natural resources. Women are invisible. If we do not count on their participation, how are we going to achieve our environmental objectives?’ shared Jauregui. It is essential to eliminate the barriers women encounter in access to information, participation in decision making and access to justice.

The first Conference of the Parties (COP) of the Escazú Agreement took place in April 2022, one year after the treaty went into force. During the COP, rules of procedure and two ad hoc groups were established: one on environmental defenders and one on Indigenous Peoples. A gender approach identifying environmental defenders was recognised as one of the challenges. The gender perspective was also discussed during a side event supported by IUCN NL.

Throughout the event, many Indigenous leaders shared their cases of socio-environmental conflicts, and a variety of potential solutions was outlined by the participants. The rich discussions and conclusions on a broad range of topics. Some key takeaways of the seminar:

FCDS, Ambiente y Sociedad, Mongabay and IUCN NL work together to improve the territorial rights and livelihoods of Indigenous Peoples and tackle forest crime in the Colombian Amazon in the joined initiative Amazon rights in focus: peoples and forest protection.

Read more about this project